In this guide, you will deploy your application to Kubernetes without writing lengthy deployment manifests. You will use the Gimlet dashboard for this task.

If you prefer the command line

You can also perform this tutorial using the Gimlet CLI. It has the same power as the Gimlet dashboard.

Navigate to your repository in the Gimlet dashboard 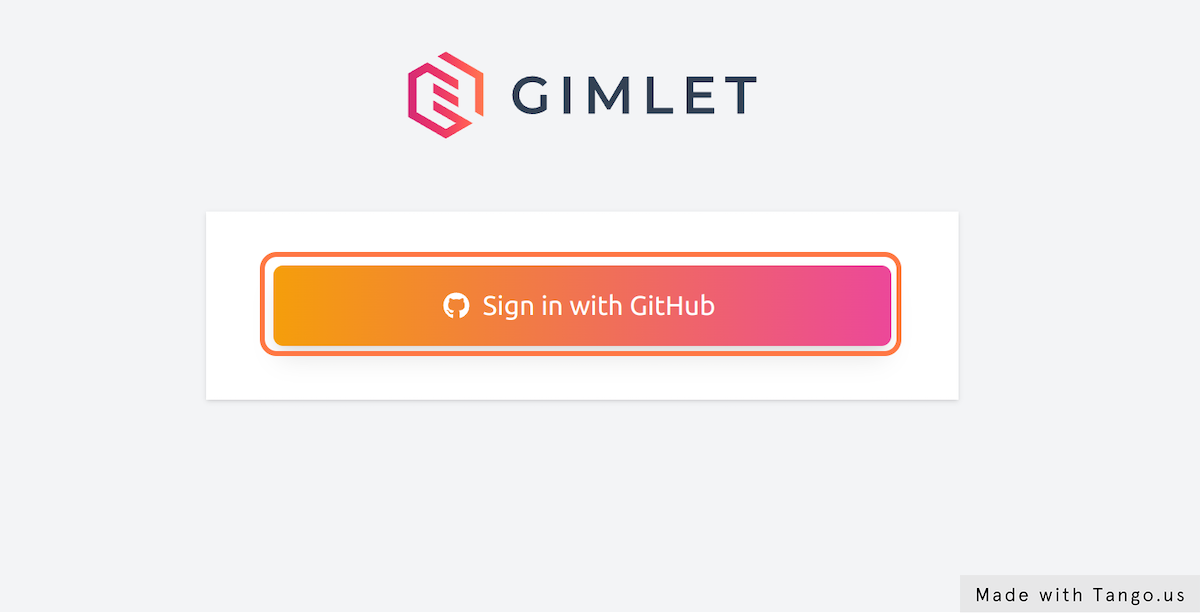 After signing in to Gimlet, you land on the Repositories view.

Locate the git repository you would like to deploy. This tutorial deploys the gimlet-io/demo-app to demonstrate the process.

There are three configured deployment environments in this tutorial: staging, preview and production, and this tutorial is going to deploy gimlet-io/demo-app to the staging environment.

The list of environments may differ for you, depending what deployment environments your team has. Pick one that is used for testing and click on Deploy this repository to Staging. This will navigate you to the deployment configuration screen. 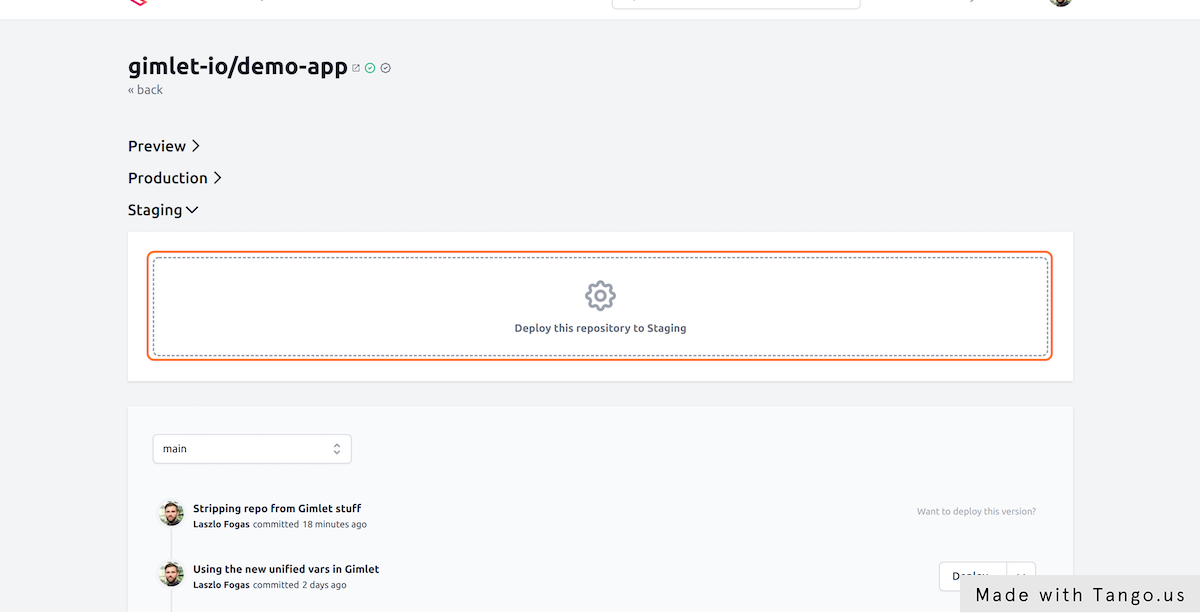 Namespaces are arbitrary groupings of deployed resources on Kubernetes. They are really name spaces, you can have identically called resources in different namespaces, they will not collide.

Because namespaces are an arbitrary grouping, your team probably has a preferred namespace structure that serve you well.

At Gimlet, as a rule of thumb, we use the environment name as namespace. For this tutorial, follow this practice and set the namespace as staging.

Set the image you want to deploy

As a prerequisite, your CI process already builds a Docker image from your application source code. And it follows a tagging strategy too.

The demo-app uses the Github container registry (ghcr.io) to host the docker image, and uses the repository name as image name. Images are tagged by the hash of the commit that kicked off the CI build

Set the image repository and tag on the configration screen. This tutorial sets ghcr.io/gimlet-io/demo-app and {{ .SHA }} respectively.

If you don't have a docker image built

You can still continue this tutorial, use the CNCF's testing image, ghcr.io/podtato-head/podtatoserver with the v0.1.1 tag. It runs a webserver on port 9000.

Watch out for the container port

Time to set the port your application is serving traffic on. It is a common mistake that developers not setting the right port in the deployment configuraton and when they try to open the deployed app in the browser, they get a HTTP 503.

The demo-app serves traffic on port 9000. Set your own port.

Set the domain name for the deployment

With the image name, tag and container port set, the final thing to set is the url of your application.

Gimlet environments are served with wildcard DNS entries, so $app.$env.yourcompany.com will be routed to the right application. 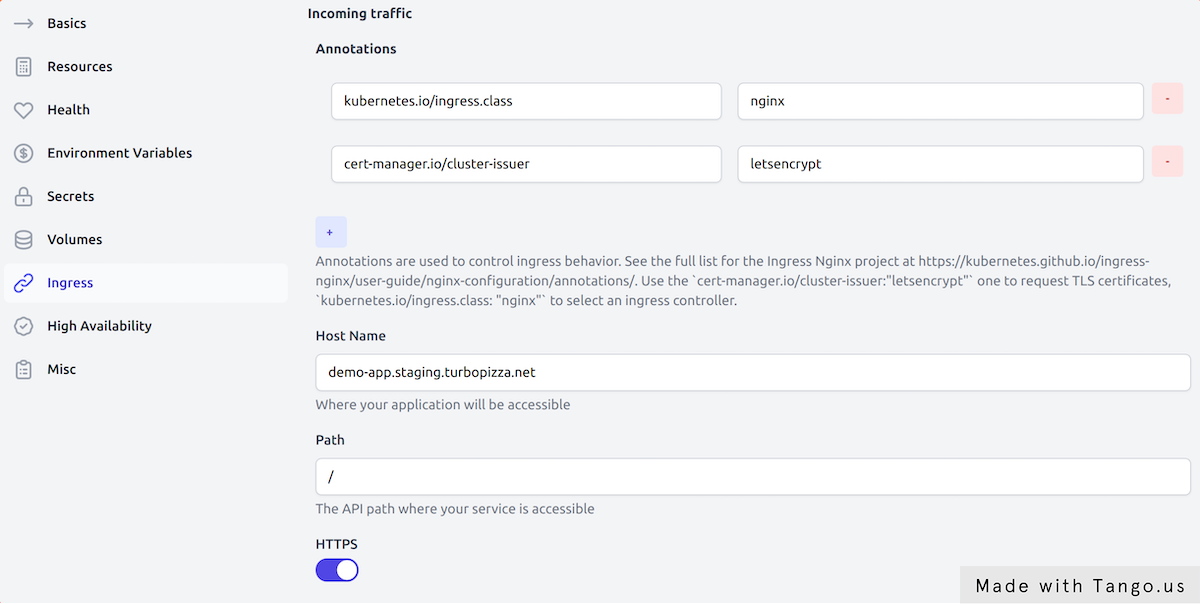 Save your deployment configuration

When you hit save, a file will be placed in your application source code. It will hold the configuration that we just set on the UI and will be named .gimlet/staging-demo-app.yaml as it follows the .gimlet/$env-$app.yaml naming convention.

Hit Save now. The changes you make on the dashboard are always backed by a git commit. This is ClickOps 🙌

You can inspect the diff

Every time you save the configuration, you can inspect the diff of the environment configuration file in Gimlet.

Gimlet assumes the gitops deployment tasks from your CI pipeline and runs them centralized. CI pipelines can call the Gimlet API to deploy, no need to script the deploy in CI.

In order to integrate Github Actions with Gimlet, you need to add the Gimlet Github Action in your CI pipeline to deploy your application.

In order to integrate with CircleCI, you need to add the Gimlet CircleCI Orb in your CI pipeline to deploy your application.

For the CI deploy steps to work, you need to provide access to the Gimlet API. You need to set two secrets GIMLET_SERVER and GIMLET_TOKEN.

To create a Gimlet API key navigate to Profile > Create a new user in Gimlet and add a user for this integration. 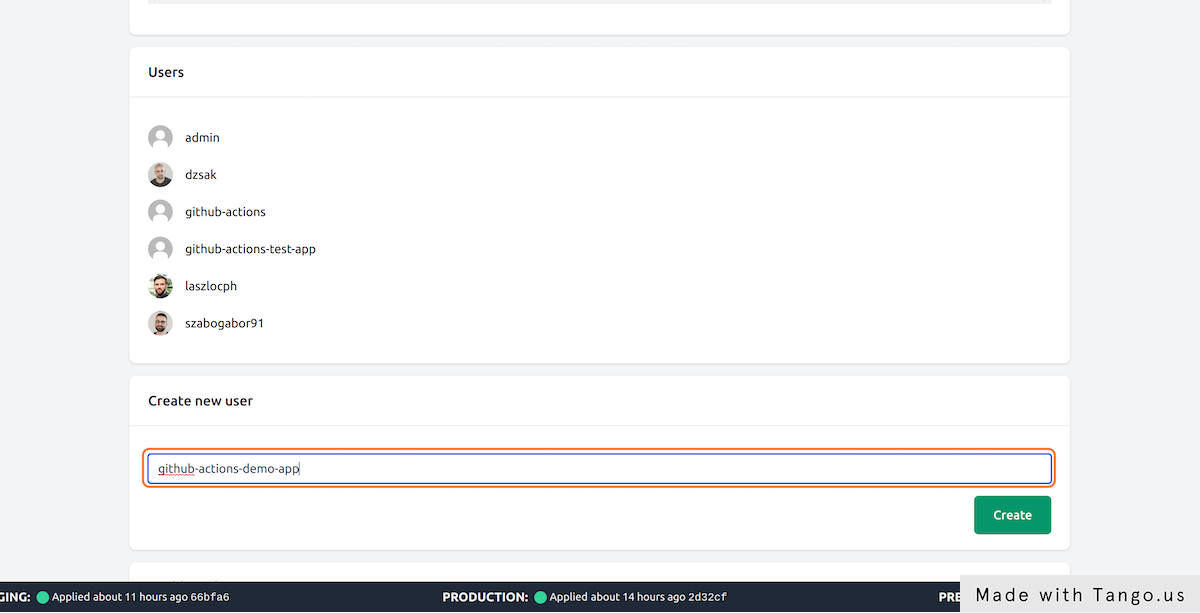 Make a dummy commit to see it deploy

Push a dummy commit once you made the changes to your CI pipeline.

CI will call the Gimlet API, and Gimlet will make a gitops based deployment of your application. You can track the CI step output for details.

Gimlet processed the deploy request and generated a gitops commit with hash 176da9babbd7647fc68f3c5268a86a1d5fc6669a. Then the CI step waited until the gitops commit was applied on the cluster by Flux:

You should see the deployed resources in Kubernetes, and you can also cross-reference the generated gitops commit (With hash 176da9babbd7647fc68f3c5268a86a1d5fc6669a in the logs above) in the gitops repository.

You can debug the gitops automation to see what went wrong.